Except where otherwise noted, content on this site is licensed under a
Creative Commons Attribution-NonCommercial-ShareAlike 2.5 UK: Scotland License.
Read more about this sites license here .
( Clicking on images will display larger versions )


Part 5 : I may as well put this post here as a placeholder.
I now know the demolition was post Dec 6 1927* thanks to an article in The Scotsman of that date and the Townsend Chimney does not appear on this 1929 ( August ) Goad Fire Insurance Map


"It is expected that the work of demolition will begin soon" 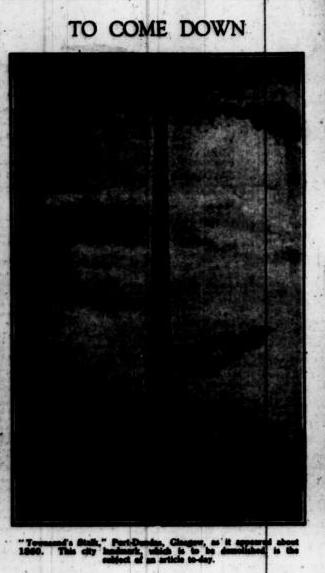 
" 'Townsend's Stalk' Port-Dundas , Glasgow as it appeared about 1860(?) . This city landmark which is to be demolished is the subject of an article to-day"

There is an article from the 14th April 1928 Adelaide Chronicle talking about the chimney coming down but not sure if the article is just late on the news.
Of course the March and April 1928 editions of the Herald are not in the Google newspaper archive.
Then hopefully scanning through pages i find May 8th 1928 Page 3 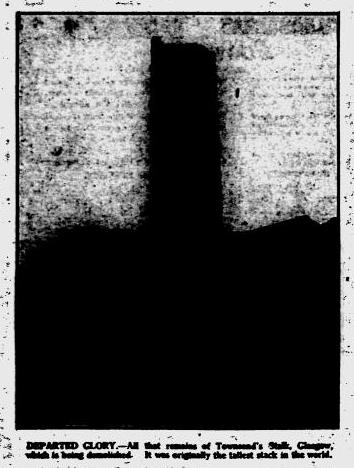 
"DEPARTED GLORY - All that remains of Tennants Stalk , Glasgow which is being demolished. It was originally the tallest stack in the world"

So the Australian paper may be a proper bound on the date.

Noticed that the Wikipedia Tallest Chimney timeline has incorrect date for the Townsend Chimney and method for the Tennants Chimney. Also not quite sure how a smaller chimney replaces it on the list

More updates as i find information


* The Scotsman article is available through proquest which you can log into using a Glasgow library ID. There were all sorts of reproduction warnings so i found the Herald version to reproduce the info.
Usage License Terms